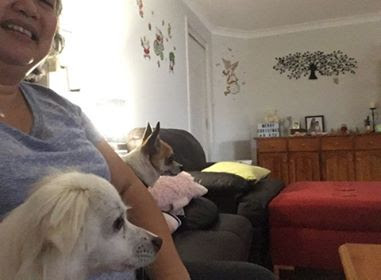 IF you cannot handle the small ones, get ready for the big ones to walk over you.

I re-enrolled in the school of discipline after whining to my sister about the scratches and nips I got from four puppies collectively called the K-pups (K for “kinit-an (abandoned)”).

Discipline them, admonished my sister. Since they have no mum, you are their mother and must teach them the dog stuff.

In Sydney, my sister and her daughters take on part-time dog minding. The lap dogs who have stayed at their home while the dogs’ guardians are away are snapshot charmers.

Of course, realities are complicated. The first boarder taken on by Joanna, my niece, was Ollie, the Chihuahua profiled by my sister as: “Sheds a lot and wees a lot. Not toilet-trained at all.”

“All the world’s a potty” is also a K-pup mantra. That must be a dog thing, sniffs my cats, who cover up after doing their business.

Toilet-training a puppy is practical because it is less easy to change the set ways of older dogs. During Ollie’s stay for a week or so, the household adjusted to curmudgeon Ollie’s dislikes (teens and other dogs) and loves (my sister). Ollie followed my sister everywhere, even binged on chips and K-drama.

Shih tzu Riri came after Ollie. Called very properly Rita by her Muslim mum, toilet-trained Riri ate only once, promptly at 9 p.m. So my sister delayed her snooze time to fix Riri’s well-balanced meal of meat and veggies.

Sociable Riri left some in her bowl for Angel, the family’s rescued Shih Tzu. A confirmed non-vegetarian, Angel considerately left the leftover carrots for my sister.

Then came Gizmo, the stereotype-buster. Aged about 10 years (about 70 years in human terms), he was in touch with his inner pup, snapping up his blanket to rush out for a weekend with Angel, chasing dogs much bigger than them in the park.

During one weekend, Zara and Pipa were left by their separate owners. Zara became Angel’s BFF (best friend forever), which must have erased her faults in my sister’s view (like Ollie, Zara also dropped out from potty school).

Despite her avowed iron stance on dog discipline, my sister and nieces hardly use tested techniques to punish misbehavior: harsh words, timeout, isolation. I suspect they are quite the pushovers for a floppy ear, eyes that swallow the world, and deep canine appreciation for Korean melodrama.

In teaching a dog you mean business, you must first be the dog.


Critics’ night. (From front to back) Angel, J., and Ollie following the KD-of-the-moment.


* First published in SunStar Cebu’s May 17, 2020 issue of the Sunday editorial-page column, “Matamata”