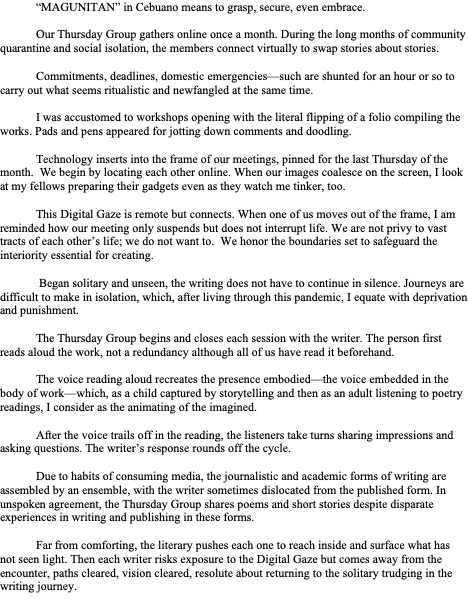 Posted by Mayette Q. Tabada at 4:54 PM No comments: 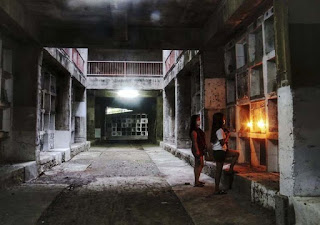 SunStar Cebu photographer Amper Campaña took what my untrained eye considers as one of the best photographs taken in a long, distinguished career in photojournalism. Last Sept. 11, the newspaper published the moment he captured two women who lit candles and prayed before a crypt at the Carreta Cemetery in Cebu City.

One credits the eyes behind a great image when actually a symphony takes over to capture what could just have been an ephemeral moment: the heart drawn to the meaning of a random act; the mind rapidly orchestrating all elements to replace disorder with symmetry; the finger pressing the shutter or button at the critical moment.

Campaña’s photograph published on Sept. 11 captures the mystery of death and its power over the living. Viewing the photo on www.sunstar.com.ph, I feel the hush when one slips into the presence of enigmas.

What separates sentience from eternal silence? No line is visible between the warm golden tones of the women’s flesh and the bright flare of the candles that melted and flickered out beyond the moment preserved in the photograph.

The dark fall of hair down the women’s backs is twin to the opaque darkness of the unsealed crypts encircling the women. The grittiness of the unfinished walk and the unpainted crypts vie with the density of the shadows closing in on the dwarfed human beings.

To be mortal is to die. But for as long as there is love and remembrance, the dead are not obliterated.

Campaña’s photograph drew me to this meditation on the significance of September 11. Codified by journalese into 9/11, the day is infamously associated with nearly 3,000 persons killed inside the World Trade Center (WTC) and on the grounds of New York City during the Sept. 11, 2001 attacks by the terrorist group al-Qaeda.

Among the indelible 9/11 images is “The Falling Man,” which shows a man dropping from the WTC North Tower photographed by Richard Drew of the Associated Press and published around the world.

The news media’s use of “The Falling Man” raised discussions and criticisms. The most searing question perhaps was asked by a participant in the 2006 documentary, “9/11: The Falling Man”: “… who… (are) we through watching that?”.

Campaña’s photograph would be timeless but for a detail that dates it: the face masks worn by the two crypt visitors. To prevent a resurgence of the coronavirus disease (Covid-19), the authorities will close cemeteries and columbariums in Cebu and Mandaue from Oct. 30 to Nov. 3.

Isolation was the sting of the pandemic. Thanks to the gifts of Campaña, his image transforms 9/11: “O death, where is thy sting? O grave, where is thy victory?” (1 Corinthians 15:55)

Posted by Mayette Q. Tabada at 4:02 PM No comments: 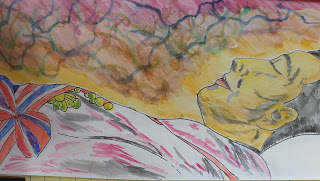 WHERE do I find voice?

The “I” that speaks is strongest in fiction, where the writer, the creator, amplifies the voice through techniques.

She can isolate the voice by creating only the character and no Other. Or she can cram a story with characters but use point of view to focus the reader only on the “I” speaking.

She can also put the “I” in claustrophobic relations with a “you,” who can be the reader privileged with unprecedented access to the “I”.

If the writer bleeds enough into the story, the “you” can feel deep enough empathy for the “I” to close the distance until, merging with the “I,” there is only the “I” once more, no Other.

The stories I like best keep the distance. The “I” and the “you” can dance closely, even have a dalliance, but preserve their solitude. How else can one hear the voice?

I recently wrote a series of stories—allegory to my literary friends, a very short story for my generation—about moons and dictators. And the sea.

There are two great mysteries I retain an unequivocal awe for: the moon and the sea. The first story was written in August, “Buwan ng Wika (Month of the National Language)”. August is also History Month.

There is no voice without language. No one exists outside of history.

The first story about the last dictator came as I stood by an upstairs window, watching the moon. “Buwan, buwan (moon).”

While August gifts us with language and history—expression and context—September 21, 1972 stilled the voices of Filipinos, including at least 92,607 victims of torture, summary execution, disappearance, and public order violation arrests from September 1972 until February 1986—the 14-year dictatorship of Ferdinand Marcos.

This is according to the “Statistical Summary of Human Rights Abuses,” part of the Ferdinand Marcos Human Rights Litigation collection of the University of Hawai’i at Manoa’s School of Law Library, which acquired the papers of the late Jon Van Dyke, who helped martial law survivors seek compensatory damages from the Marcos Estate.

According to the University of Hawai’i, the Marcos papers remain important because “the issue of Martial Law has not been rectified in the Philippines”.

Indeed. Congress passed this week a bill declaring Marcos’s birthdate of September 11 as a non-working holiday in Ilocos Norte. If the Senate approves its own version, President Rodrigo Duterte will sign this into law as surely as the moon is framed by the upstairs window, as buwan ng Agosto is followed by buwan ng Septyembre, as voice is stilled by repression.

The great postcolonial undead in our collective narrative, Ferdinand Marcos is the “you” surfacing the “I” that should never forget, never be silent.

Posted by Mayette Q. Tabada at 3:52 PM No comments: