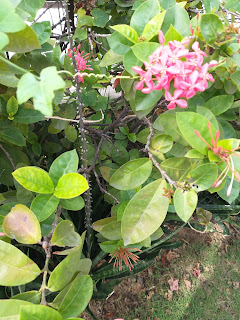 THE GARDEN, at first, was a shortcut, a quicker way to reach the cashier, the labs, the blood bank squirreled behind the bleakest of alleys.

Then I noticed that few took this path: the nurses with their color-coded trays of pills and paraphernalia, the residents in billowing white like avian escapees, the caregivers clutching little grey slips, anxious lest the prescriptions flutter away like the flimsiest of hopes.

For the minute or so it took to saunter through the garden, I avoided the hushed bright corridors where a consultant whispered to stone-faced relatives about a metal heart valve, the shroud on the gurney creaking on its way down to the morgue.

Moving through the hospital maze, I know the corridors by smell more than sight, the odors of disinfection layering over the stream of maladies, an olfactory map to the mysteries of the human body and its infinite ways of disintegration.

This theatricality cultured in hospitals is muted in the garden where life is not tracked by medical doses or accompanied by the clicks and electronic murmurs of life-extending machines. It is reassuring to find the sap at its riotous, its most fecund, flowers hypnotizing butterflies, bees ravishing pollen-sticky stamens, this old soul drunk on sunshine, breeze, the fuzz of grass as unruly as morning-after love.

Certainly the nuns had more pious intentions in creating this oasis. As with plants, we grow more assuredly towards the light when we are firm in our moorings.

To see the connections not just of this organ to that, to dwell on the consequences of desires on mortality, to see in suffering and tribulation the profoundest confirmation of the indestructible and the eternal—our science has yet to catch up with the ancients.

When the Spanish colonizers reached our shores in the 16th century, nutmeg was among the “first drugs” discovered, wrote the priest-scholar Ignacio Francisco Alcina.

Nutmeg trees bled sap like blood; hence, their repute as “blood trees” warding off illness. Much prized was a variety called “doghan” because the natives believed its sap was blood.

The tiny red blossoms in the garden I escape to have no scent. Remembering the tubes coding my mother’s blood (red clamp for the stream leaving her body and blue for the returning flow, she explains), I repeat my own mantra: red blood for oxygenated; purple for deoxygenated. Red now is the new favorite.

Posted by Mayette Q. Tabada at 4:18 PM No comments: 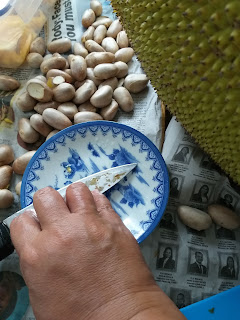 THE JACKFRUIT turned out to be a changeling. For days, the bulbous green object lay in a box, where the husband had heaved it since Sunday after we bought fruits from a roadside stall in Batangas.

The avocados were naturally ripened, their seed giving a muted knocking when the fruits were shaken. We could already taste those creamy, healthy meals.

The jackfruit, though, made the husband hesitate. Both of us had always eaten the yellow, fragrant fruits already peeled and pithed. The farmer advised sticking a piece of bamboo into one end of the fruit; she said the impalement hastens the ripening.

Long after the avocados were mashed and consumed, the jackfruit went undisturbed under the table. Just when we thought it was a dud, the house was suddenly enveloped in a fragrance that grew stronger each day.

I had ignored the farmer’s advice, thinking that I was not hungry enough to ram a stick into that thick green rind. Yet, the ingratiatingly sweet scent emanating from the now yellow jackfruit had a peremptory presence that led me to clear the table after one breakfast.

Over newspaper sheets I rolled the heavy fruit. On a saucer, I poured edible oil, rubbing this on my hands and knife. Our longtime yaya advised that the oil will keep off most of the sticky sap. Before ringing off, Yaya said: “Pagbantay (be careful).”

As a child, I squatted on the ground as Yaya and companions shucked the “nangka (jackfruit)” in the dirty kitchen. The smell of wet newspapers mingled with that of kerosene; over these layers hung that penetrating perfume, sticky as the white filaments clutching the yellow flesh I was swallowing as fast as I could chew.

In the greed fed by the peeled nangka, it never occurred that what I desired is something the living tree finds extraneous. The jackfruit animating such merienda staples as “turon” and “benignit” is merely the aril, the sweet yellow flesh coating the seeds, the small kidney-shaped achenes.

Boiled jackfruit seeds are bland; some throw these away. Until I took apart a jackfruit, I never realized how, with everything in its nature—rind, core, and sap—the jackfruit resists all attempts to expose the achenes. In my oiled, slippery hands, I turned away the knife’s edge and sawed outwards after earlier attempts nearly impaled the knife on my stomach.

By nightfall, with a large portion of the jackfruit still uncarved and unshucked, the taste and smell of the aril filled me with revulsion. The achenes—the jackfruit “seed” that is actually the “fruit containing the seed”—I stored.

Aches and cuts yielded such a harvest, as insight follows the stripping down of language, as truth confronts after delusion.

Posted by Mayette Q. Tabada at 2:21 PM No comments: 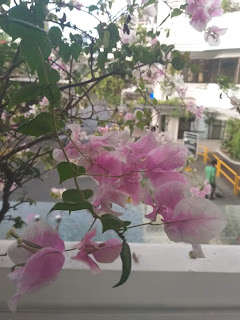 Will I recognize You when You come again? Fourteen years ago, as the family sat down in Papang’s hospital room for a silent supper, the flat line on the monitor announced itself like a hive of bees drawn to a riot of flowers.

In the electric distraction of extreme medical measures reviving his body, Papang slipped away with You and went home.

How else can I explain that in the same minute the Code Blue team was ramming a tube down the trachea to open an airway, neighbors spotted his figure pacing outside the house and his longtime companion saw a dark shadow going around the magnetic blue 1964 Volkswagen Beetle, older than I, his first child, by a year and arguably his first baby?

Or were You hiding behind Papang’s feet, which splayed like the open wings of a resting moth, framing the imperturbable green of the flat line punctuating his 81 years?

A few nights ago, while washing dinner dishes in Silang, Cavite, I opened the door after hearing a strange meowing. Instead of one of the feral cats lounging around our place, an empty porch awaited. The brown moth was already resting against the ceiling when I went back to finish clearing the table.

In folklore, moths are harbingers of death, war, and disaster. The last two are anomalies but death, I disagree, is far from being a stranger. As a child waking up from afternoon siesta in the cavernous room of my great grandparents’ house, I cried shrilly to find myself alone and she would come running.

While dusty motes drifted in the shifting shafts of afternoon light, I dreamt of You, sniffed at the sweetly odorous mustiness of my great grandparents’ room across ours, where I imagined my great grandfather drowned in his sleep, where the pickled ham of my great grandmother’s amputated leg brooded, not far from the dirty kitchen where the turtles wept as they boiled.

Yet, whenever Mama entered the room, You stepped back. When she slipped me on her lap in the dentist’s chair, when I followed her voice and smile to emerge from motherhood’s anaesthetized dreams, You always deferred. Death is the terminus except where love is concerned.

The brown moth slipping in that night may have been You, up to Your usual confounding tricks. Except it wasn’t a moth, resting with open wings. Like hands folded in prayer, those wings marked the brown creature as a butterfly.

In my late grandmother’s garden, butterflies preened like orchids. The visitor that night was dun and modest but I listened and heard my mother’s labored breathing on the phone, the voices of my dead across the void: death is the terminus except where love is concerned.

Posted by Mayette Q. Tabada at 2:09 PM No comments:

WHEN it starts to rain inside the bus, times are really tough.

Cold on the trail of Cebuano newspapers published during the American colonial era, I dive these days into the longest, dirtiest river snaking through Metro Manila: Edsa.

The Epifanio delos Santos Avenue (Edsa) is a major thoroughfare that has been compared during traffic gridlocks, by sharp-eyed netizens, to a world titlist’s shimmering sinuous scarlet gown when the highway is turgid with the red taillights of vehicles paralyzed by the curse of neverending rush hour.

I can only wish then I were a crocodile, river denizen of power who can inure itself by merely closing those primeval lids and reducing the horrors of the present into the toothless myths of the past.

In reality, I am only one of Edsa’s minions, a public commuter whose magic extends only to the unfurling of an umbrella while riding a bus whose ceiling started to drip steadily in one of the recent downpours. My companion covered her head with a fuchsia shawl while my umbrella, already drenched from use, trickled more tears of dust, rust, and the unthinkable on our heads.

Yet, I cannot complain. When technocrats announce the orange alert for dangerous levels of rainfall—Stay home! Stay safe! —that is when the streets are at their cleanest. Rains flush clear streets and sidewalks of most of the peddlers, vendors, and beggars that require extraordinary measures like an Isko Moreno for “street clearing”.

The current darling of the press, Moreno’s claim to political will was sealed by blitzkrieg operations moving out the hardiest vendors occupying Divisoria, Recto Avenue, and other enclaves notorious for sidewalk and street “squatters”.

The rains, pitiless as politicians rushing to hurl ordinance, bandwagon, and all at encroaching members of the informal economy, lacks a political agenda to reach for higher political offices by interpreting public service with social blinders, stopping short of offering relocation and sustainable space-sharing alternatives to vendors, as much part of the public as the bourgeoisie and businessmen claiming right of way for their cars and delivery trucks.

If politicians swam regularly in asphalt rivers with the folks peddling boiled peanuts, corn and bananas, foot socks, umbrellas, phone SIM cards, and “sari-sari,” they will not mistake the call that unites us all: to survive.


* First published in SunStar Cebu’s August 4, 2019 issue of the Sunday editorial-page column, “Matamata”
Posted by Mayette Q. Tabada at 6:07 AM No comments: